One of the best parts of our trip to Spain was our Andalusian road trip, which took us from Granada to Seville by way of Nerja, Frigiliana, and Ronda.

Winter is fast approaching here in New York, and it’s getting dark around 4:30 pm. There are still restrictions in place for gathering and of course traveling. All of this to say – it seemed like the perfect time for some Photo Feature escapism!

I’ll share more about Nerja soon and you can read about Frigiliana here. But for now, keep scrolling to take a virtual visit to gorge-ous Ronda.

Ronda is an especially unique city. It’s perched on either side of a 120-meter deep gorge, carved out over time by the Guadalevín River. There are three bridges spanning the gorge: the Old Bridge, the Roman Bridge, and the New Bridge.

The New Bridge, completed in the late 18th century, rises dramatically from the canyon floor. This impressive structure took three and a half decades to build and has become an enduring symbol of the city.

The first attempt to span the gorge at this height featured a single arch design. Tragically, it collapsed in 1741, killing 50 people. Construction on the bridge still standing today started in 1759 and lasted until 1793.

Ronda’s Puente Viejo, or Old Bridge, was built in 1616 and is now open to pedestrians only.

Lastly, the Puente Romano, or Roman Bridge, also known as the Puente Árabe, or Arab Bridge, can be found just past the Old Bridge and next to the city’s Arab Baths.

You can take in views of Ronda’s El Tejo Gorge and impressive New Bridge from various points throughout the city, like the Mirador de Cuenca and the Mirador de Aldehuela. That said, if you’re up for a short walk down into the gorge itself, you can enjoy views of the bridge, the canyon, multiple waterfalls, and both sides of the city from below.

Cross the Puente Nuevo to get from the new town, or El Mercadillo, to the old town center, also known as La Ciudad. Turn right to head toward the Plaza de María Auxiliadora, then take another right for the path leading down to the Mirador Puente Nuevo de Ronda.

You can also head further down into the gorge to multiple viewpoints including the Mirador del Vento and La Hoya del Tajo. If you have a car and want to skip the walk back up the gorge, you can also reach La Hoya del Tajo from the Carretera de los Molinos, a road below the city.

Heading back into town, stop by the Placa A Los Viajeros Romanticos, a ceramic tiled mural paying homage to the viajeros romanticos, or romantic travelers, that have passed through Ronda and shared their thoughts on the city.

Ronda is, indeed, one of those places which stands alone. I know of nothing to which it can be compared.

Two of the most famous “romantic travelers” inspired by Ronda are Ernest Hemingway and Orson Welles. Both authors spent time in Ronda and wrote about the city. Welles was so enamored with Ronda that his ashes were scattered here in 1987. Scenes from Hemingway’s For Whom the Bell Tolls are based off of events that took place in Ronda, and in his book Death in the Afternoon, he wrote:

There is one town that would be better than Aranjuez to see your first bullfight in if you are only going to see one and that is Ronda. That is where you should go if you ever go to Spain on a honeymoon or if you ever bolt with anyone. The entire town and as far as you can see in any direction is romantic background… If a honeymoon or an elopement is not a success in Ronda, it would be as well to start for Paris and commence making your own friends.

It’s no surprise that Hemingway, fascinated by bullfighting, found inspiration in Ronda. The city’s renowned 18th-century bullfighting ring is the oldest ring in Spain constructed entirely of stone. While the plaza is smaller and younger than the one found in nearby Seville, it is home to a unique style of bullfighting, carried out on foot instead of on horseback.

Today the Plaza del Toros is a museum that only hosts one bullfighting event each year: the Feria de Pedro Romero, named for the founder of modern bullfighting. The trademark of this annual event is the Corrida Goyesca, or Goyaesque bullfight. Participants and attendees dress in 18th-century costumes celebrating Spanish painter Francisco de Goya, who painted a famous portrait of Pedro Romero now housed by the Kimbell Art Foundation in Texas.

Hemingway was not wrong about the “romantic background” in Ronda. While the city itself is beautiful, the countryside surrounding it does not pale in comparison. A great place to enjoy panoramic views is the Alameda del Tajo, a 19th century park offering leafy, tree-lined pathways and vertigo-inducing viewpoints like the Paseo de Los Ingleses.

And if you don’t think you’ve tested your fear of heights quite enough yet, head to the nearby Mirador de Ronda. Just make sure you don’t put yourself in grave danger by crossing the balcony’s barrier and wandering onto the bare cliffside. (We literally watched someone do this from afar as members of their party cried after them. I hope they are okay.)

Ronda is often visited as a day trip, but there’s plenty to keep you busy overnight if you have the time or are passing through on a road trip like we were. We stayed at the Hotel Alavera de los Baños and loved it. The historic building has free parking, delicious breakfast, and beautiful common spaces including a garden and a pool.

Ronda has a widely respected food scene, including the Michelin-rated Bardal by Benito Gómez and his nearby, more affordable eatery Tragatá. That said, we arrived on a Sunday evening after driving and sightseeing all day. Many restaurants were closed, and we were too hungry to look for long. Luckily, we ended up at Las Maravillas and had a great meal in their lively dining room.

Ronda is a unique and worthwhile destination that can be combined with stops to nearby pueblos blancos, beach stays along the Costa del Sol, hiking trips in the Parque Natural de la Sierra de Grazalema, or city breaks in Seville, Córdoba, and Granada.

I have sought everywhere the city of my dreams, and I have finally found it in Ronda. Nothing is more startling in Spain than this wild and mountainous city.

Have you ever been to Ronda? Let me know in the Comments!

Pin it for later

Share on PinterestShare on FacebookShare on TwitterShare on EmailShare on SMS
Spain
November 30, 2020 By Caity Pfohl 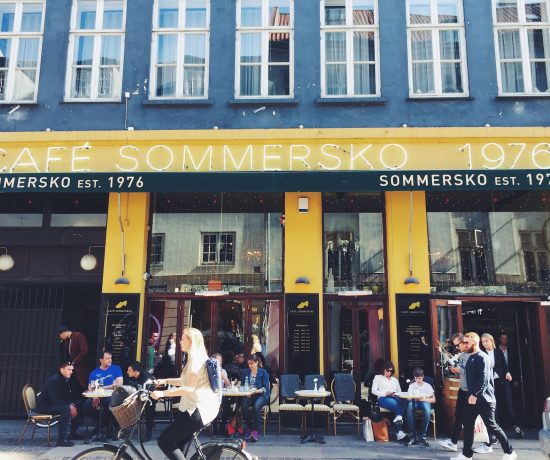 A Hot Dog For Every City: Exploring Scandinavia (Part Two)