A Hot Dog For Every City: Exploring Scandinavia (Part One)

Last May I fulfilled a long-held travel goal: visiting Scandinavia. It had been on the top of my travel wish list for as long as I can remember, and when I finally clicked “confirm purchase” on my plane tickets, I was overcome with excitement. And this trip was especially exciting because my friend Abbie was joining me. While traveling solo or with your partner can both be super fun, there’s nothing quite like Q time with one of your best girl friends – and if that Q time is taking place in some of the coolest cities and most beautiful natural scenery you’ve ever experienced, then all the better.

Abbie and I had four cities on our itinerary – Amsterdam, Copenhagen, Stockholm and Bergen – and just under three weeks to see them. This post is the start of a four-part series, with one post dedicated to each destination. While the Netherlands is not technically part of Scandinavia, my Amsterdam recap is included here as it was part of the same trip. If you’re interested in the other destinations as well, be sure to check out parts two, three and four after reading about Amsterdam below.

Our sightseeing in the Netherlands started before we even got off the plane at Schiphol Airport, observing the neatly laid out, vibrantly colored tulip fields from above as we neared the ground. Without even meaning to, we happened to be visiting during peak tulip season. (Score!)

Our first day in the city was a bit of a daze, as the first day of any trip involving a large time change often is. We decided to simply venture from our Airbnb into the city center and see where the day took us from there. If you’re going to wing it and wander around a new place, there’s really no better city for it than Amsterdam.

With its dreamy canals lined with picture-perfect row houses and well-dressed Dutch men and women casually biking every which way, it really does look like a postcard come to life. My favorite thing to do in any new place is simply walk around and take in my surroundings, so this was a beautiful introduction to the city, even if it was somewhat subdued due to jetlag and lack of sleep.

On our second day, we were en route to meet up with a group for a free walking tour when we jumped off of our tram at the sight of a bustling street market. Not wanting to rush the market, we postponed the walking tour for another day. After refueling post-market with lunch and coffee at Geflipt, we continued our walking exploration of the city, visiting the scenic Jordaan district, Museumplein (where you’ll find the often-pictured “I Amsterdam” sculpture), and Leidesplein, among other areas.

The first hot dog of the trip, bought from a cart at Leidseplein.

That night, we treated ourselves to the traditional Dutch pannenkoeken (similar to French crêpes) for dinner, and the equally delicious poffertjes (like mini, fluffy pancakes – ours served with powdered sugar and lemon juice) for dessert, our waiter only delivering our choices to us after we gave their proper pronunciations a go (not super successful, but he humored us all the same). Afterward, we headed out on a boat tour of the canals, which was a quiet, relaxing and inexpensive way to see the city from a different perspective.

The next day we headed out of Amsterdam proper to get up close and personal with the world-renowned Dutch tulip fields. There are several ways to go about this from Amsterdam, and in the end we decided to buy round trip tickets on the Arriva Keukenhof Express, a bus that runs continuously throughout the day between Schiphol Airport and Keukenhof Gardens in Lisse.

Keukenhof (translation: kitchen garden) is one of the largest flower gardens in Europe and is open from mid-March to mid-May, with prime tulip viewing occurring in April. It’s situated smack dab in the middle of Holland’s “dune and bulb” region, surrounded by fields upon fields of tulips and other flowers. For 10 euro a day, you can rent bikes right outside of Keukenhof’s entrance and explore the 35km of bike paths in the surrounding area at your leisure. There are four separate, well-marked paths to choose from depending on how far you want to go. 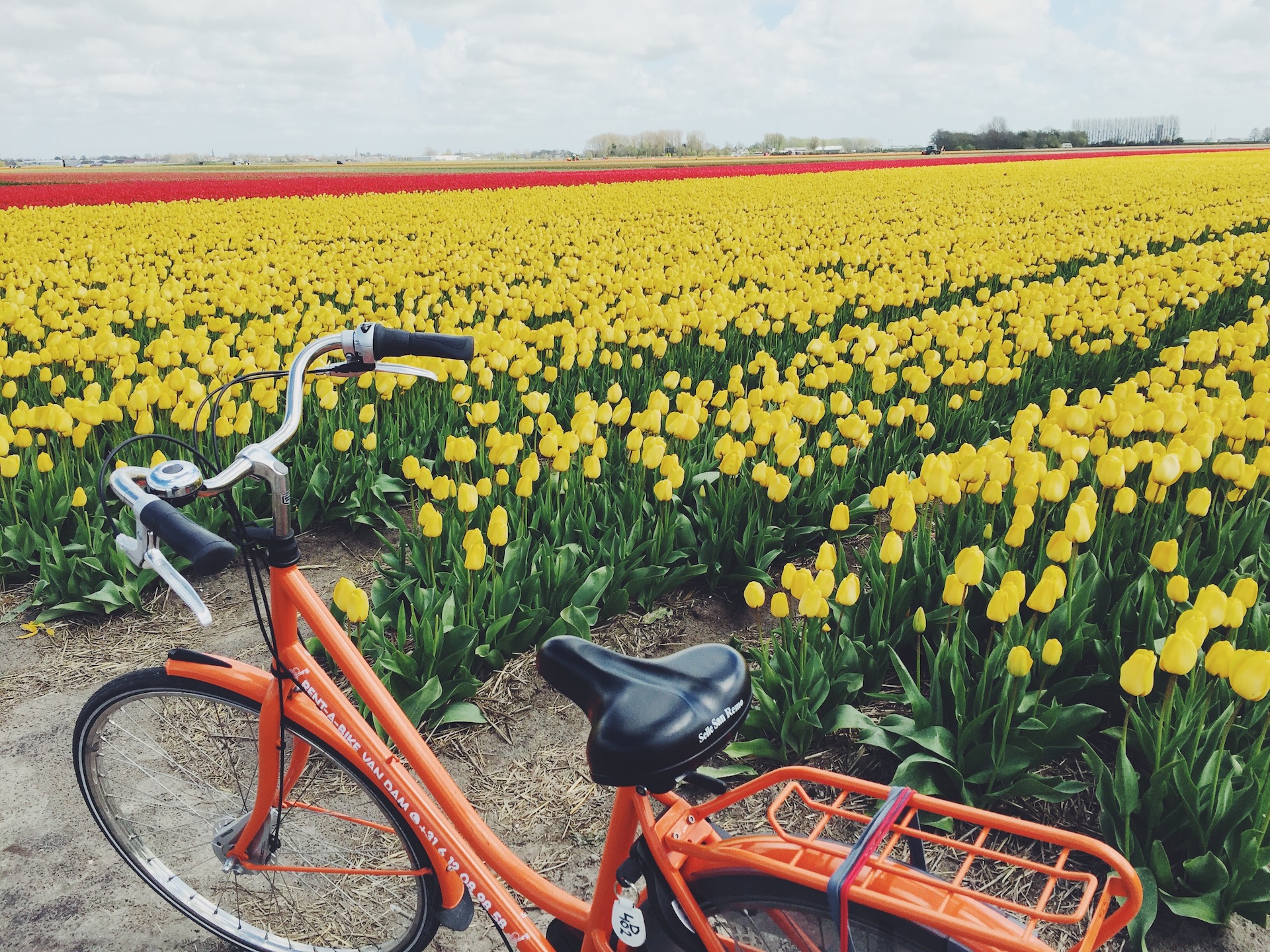 This was my favorite part of our time in the Netherlands. Though the beginning of our bike ride took us by fields of pretty yet admittedly unremarkable flower fields, we soon found ourselves in the midst of field after field of Technicolor tulips, stopping incessantly to take pictures, walk among the flowers and generally enjoy the immense amount of natural beauty surrounding us.

After the beautiful but hectic atmosphere of downtown Amsterdam, it was remarkably rejuvenating and calming to spend time exploring the fields, and I couldn’t believe how numerous, vast and breathtaking they were. 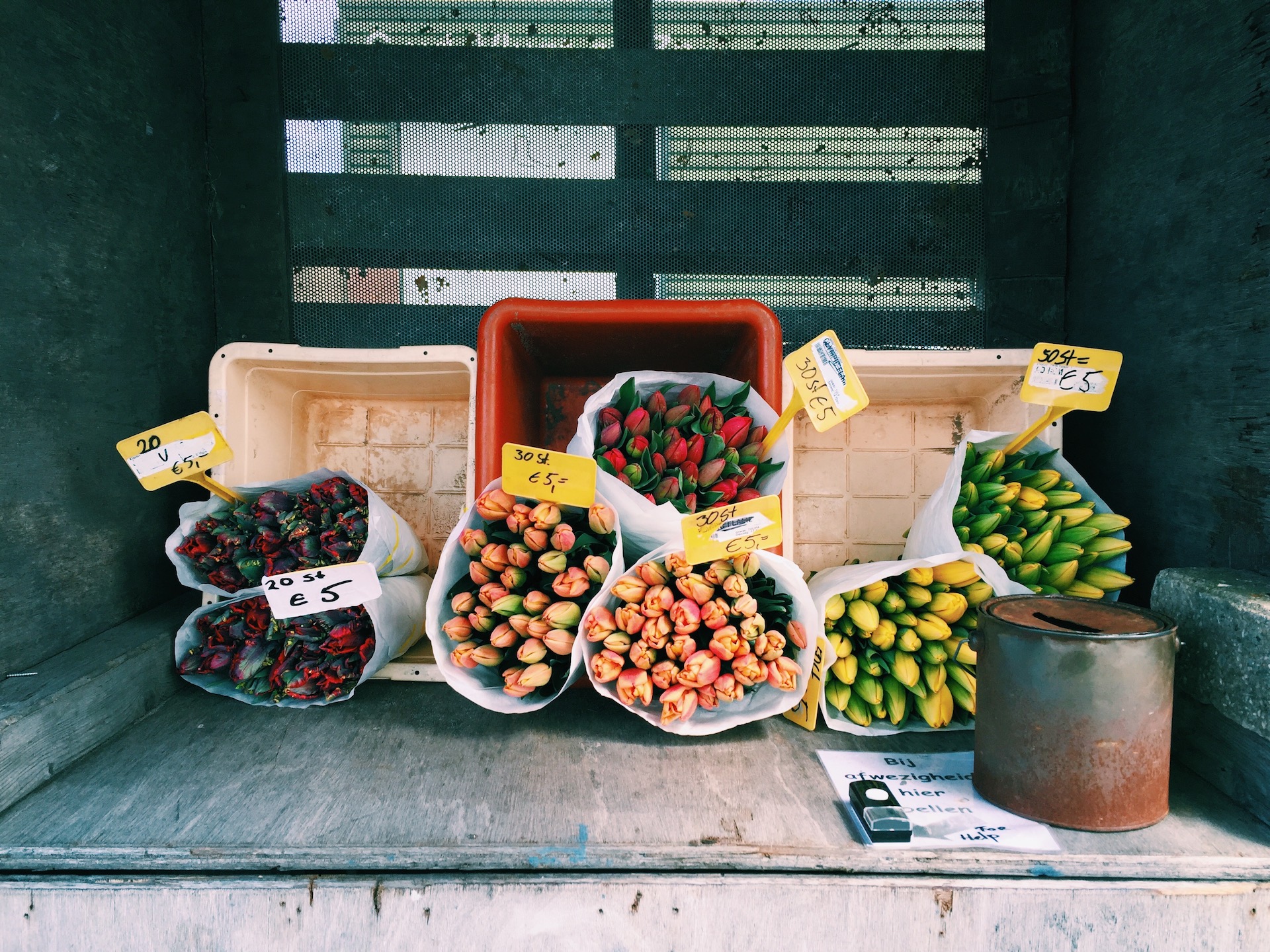 The one downside to the day was the vast difference in quality between the bike I rented and the bike Abbie rented. While I had a new, clean bike, Abbie (being a few inches shorter and needing something smaller) ended up with what can only be described as – frankly – a rusty old piece of junk. We didn’t realize until partway into our bike ride (when turning around wouldn’t have made sense) how much of a pain it was going to be for her to ride. Basically, just be aware that if they try to rent you anything that looks subpar compared to their other bikes, stick up for yourself and refuse it. Your bum will thank you!

We ended the day exploring Keukenhof itself. Despite having a distinctly touristy vibe (we quickly sought refuge from the loud, repetitive music emanating from the giant music box located by the main entrance), it was one of the most beautiful gardens I’ve ever visited. In addition to tulips, there were countless other flowers on display, all immaculately displayed and scrupulously cared for, boasting whimsical names like Kissproof, Apricot Impression and Yellow Flight. Especially since we were already right there, it was definitely worth a look around.

If you’re in the Netherlands between March and May, there’s no question that you should take the time to visit the tulip fields; however, I might recommend going about it in a different way than we did. While taking the Keukenhof Express bus was simple and straightforward, it was a somewhat tiring and crowded ordeal when all was said and done. On our way to and from Keukenhof, we ended up waiting in long, slow-moving lines for our turn to board the bus, and while we lucked out with seats on the way there, we had to stand on the way back.

I read about other options, such as renting a bike right in Amsterdam, taking a train to one of the smaller cities near the tulip fields, and continuing your day from there. But in the end, for simplicity’s sake, it seemed like renting at Keukenhof would be the way to go. As with most things travel-related, simplicity sometimes comes at the cost of being the road most taken, i.e., very crowded! But at the end of the day, what will stick out in my memory are the vivid seas of crazy pretty flowers…not the crowds.

Bottom line? However you decide to go about it, you’ll likely have a great time (if tulips on tulips on tulips is your thing!); just know your options beforehand and go with whatever makes the most sense for your needs. 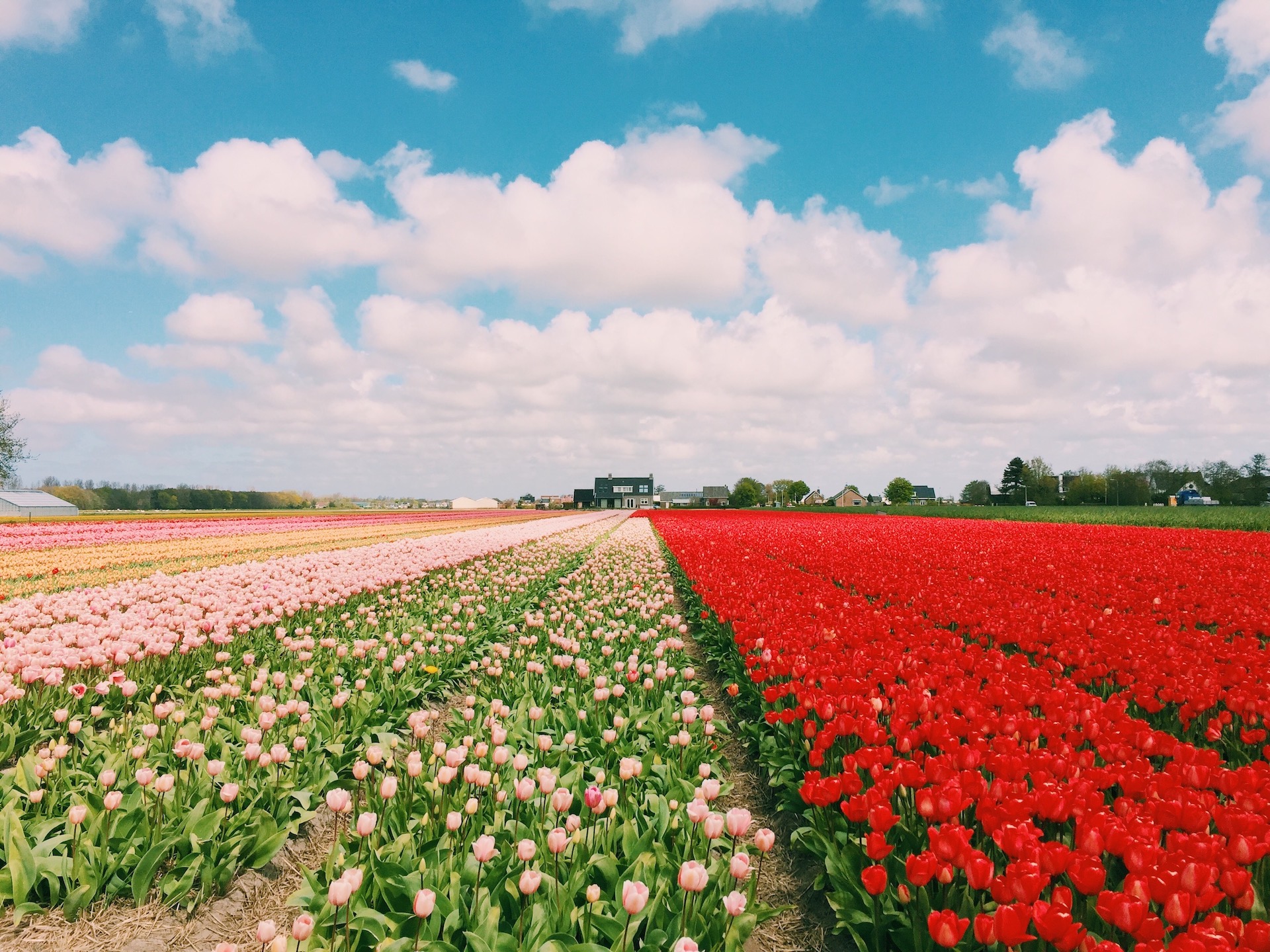 On our fourth and last day in Amsterdam, we took the free walking tour we had originally meant to take on our second day, and it was great. I *always* recommend free walking tours as it’s a fun, efficient, budget-friendly way to experience a new place. The tour was scheduled to last for three hours and we ended up ducking out a bit early to grab lunch before catching our flight to Copenhagen. We were sorry to miss the end, but I’m glad we were able to squeeze in as much as we did.

Visiting the peaceful Begijnhof Square during our free walking tour

We loved: Located down the street from our Airbnb was the beautiful, welcoming Broers Café. In search of coffee one morning (but really, when were we not in search of coffee?) we had a lovely chat with the owners, who excitedly showed us their model of a New York taxi when we told them we were from the States.

Great customer service and positive interactions with strangers are always a plus, but take on a whole new level of satisfaction when they occur across linguistic and cultural divides. For whatever reason, we had had some relatively challenging interactions with other people during our time in Amsterdam, so it was especially gratifying to be met with some good old-fashioned friendliness.

We missed: Visiting the Anne Frank house. This had been on our list, but we underestimated the amount of pre-planning it takes to visit. Basically, from 9am until 3:30pm, only visitors with pre-purchased online tickets (bought for a specific time slot) will be admitted. From 3:30 until closing time (7pm November – March, 10pm April – October) you can line up and buy tickets on-site. Just be aware that the line is infamously long and slow-moving, and sometimes people wait for hours only to miss the cut-off entry time.

By the time we went online to try and buy tickets for a specific time slot, they were sold out. These tickets go on sale two months in advance and fill up quick. We debated trying our luck with the line in the evening, but with such a short amount of time in the city, we hesitated to spend any of it queuing up on the street.

As disappointed as I was to miss it, I tried not to dwell on it too much. Planning mishaps are bound to happen while traveling, and as frustrating as they can be, it’s important to focus on the bigger picture and try to be thankful for what you do get to experience as opposed to what doesn’t work out.

Don’t get me wrong; I’m not perfect at this by any means. It’s one of my biggest challenges while traveling. But, views like this help.

I’m sharing this post (after the fact) to two lovely new link-ups. Monday Escapes is hosted by Lisa at Travel Loving Family, Sarah from Extraordinary Chaos, Karen from Mini Travellers, and Claire from Tin Box Traveller. City Tripping is hosted by Cathy at Mummy Travels and Elizabeth at Wander Mum. Be sure to click through to their sites for more travel inspo!

A Hot Dog For Every City: Exploring Scandinavia (Part Three)

24 Hours on the Costa Brava