A Hot Dog For Every City: Exploring Scandinavia (Part Three)

When time and distance permits, I definitely prefer to travel by land as opposed to dealing with the tedium and complications of an airport. (I think we can all agree that the fewer times you have to take your shoes off for security, the better.) Copenhagen and Stockholm are about five hours from one another, making for an easy and scenic train ride between the two.

If you find yourself in Stockholm…

Fika is a Swedish and Finnish practice that refers, in its simplest sense, to taking a break. Whether enjoyed with friends, family or colleagues, fika can involve coffee, tea, juice, pastries, sandwiches or any number of other food and drink options, but traditionally involves sweet pastries, especially cinnamon buns.

The name is an example of “back slang” (which I first learned about in France, referred to there as verlan) where slang words are derived from reversing the syllables of a word. In this case, fika was created from kaffi, an earlier spelling of the Swedish word for coffee (now kaffe). 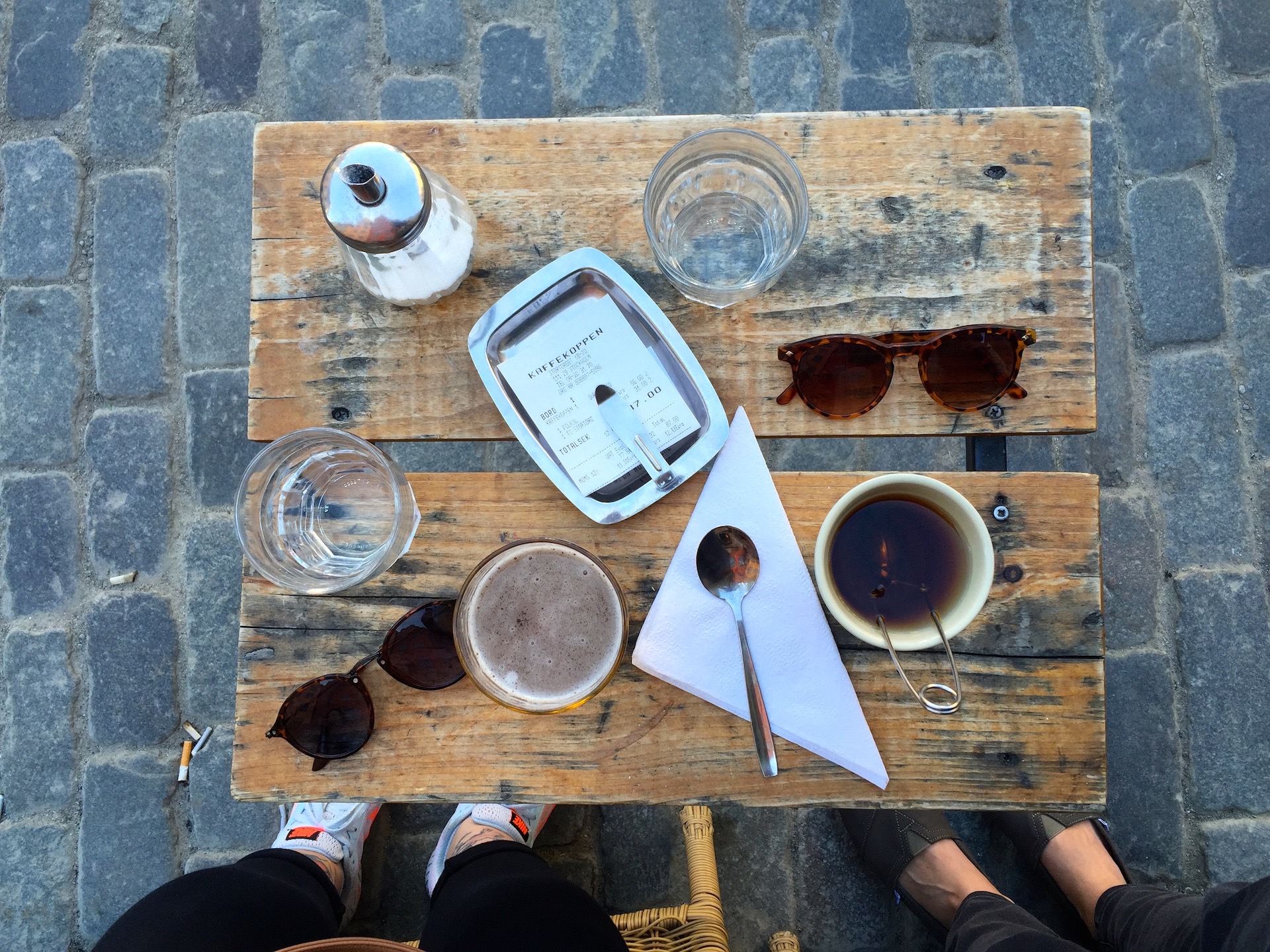 Grabbing a fika in the name of research

Unsurprisingly, Stockholm has a thriving coffee/café scene, and our Airbnb happened to be a short walk from one of its best: Café Pascal. We started every day in Stockholm here.

Hop on an Ocean Bus Tour

More commonly referred to in the US as a duck tour, we joined one of these amphibious vehicle tours as an alternative to a walking tour. While outings like this can be hit or miss, I was convinced to try it out after seeing the high ratings on Trip Advisor, and I’m so glad we did.

Our guide was hilarious and informative, not to mention it being a great way to cover a lot of ground (and, erm, water) in one go. Plus, being that the city of Stockholm is spread across 14 islands, it definitely makes sense to get out on the water in one way or another if you can. 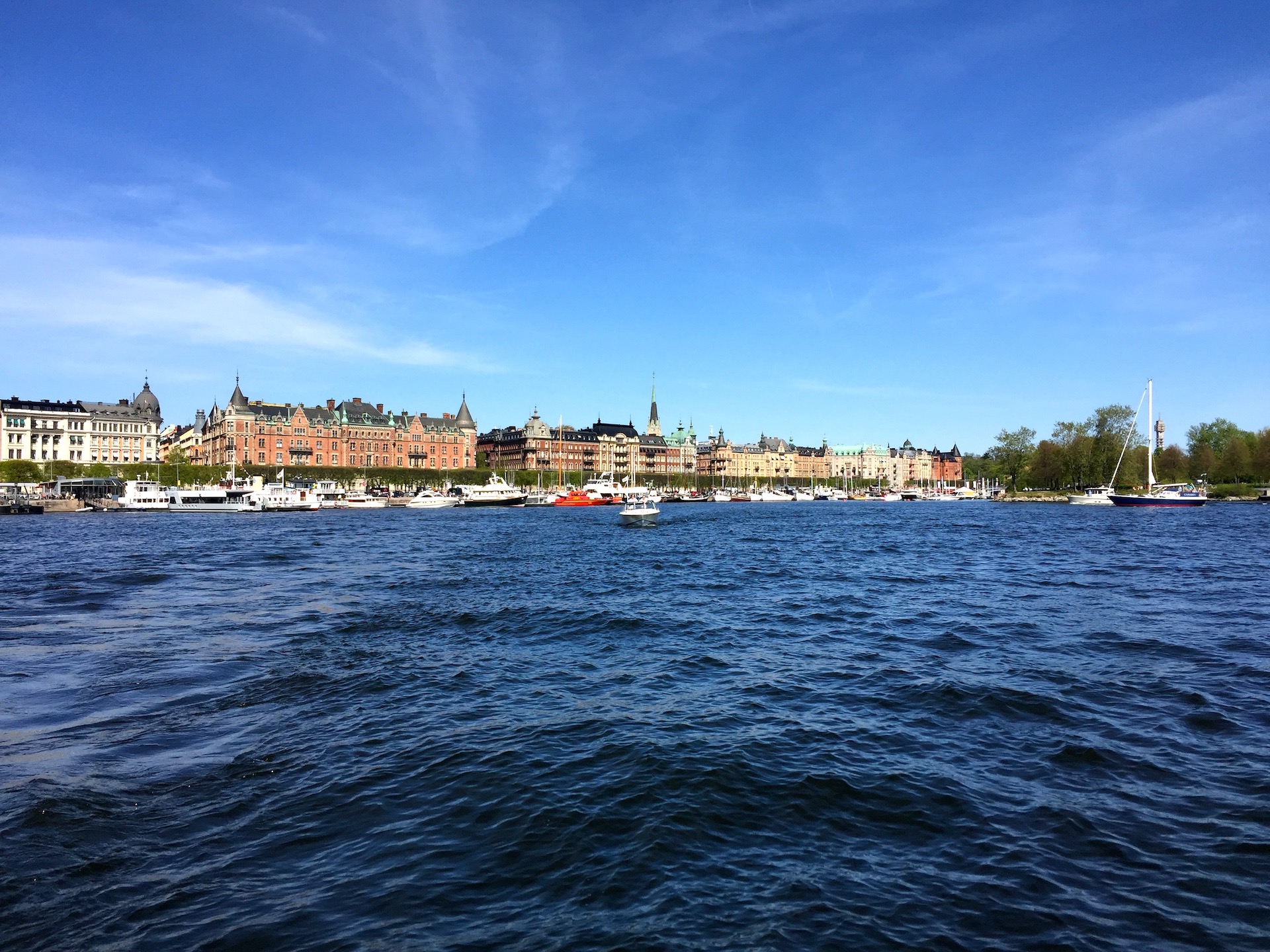 Wander Through Gamla Stan (And Have Your Camera Ready)

Stockholm’s Old Town is as picturesque as you would imagine any European city’s old town to be. Don’t miss Stotorget, the oldest square in the city.

A beautiful photography exhibition center. While we were there, I especially enjoyed the Bettina Rheims exhibit, I’ll Be Your Mirror, as well as the moving Ikoner: An Exhibition About the Right to Exist. Even if you’re not into photography, Fotografiska is worth a visit for its fifth floor café alone, offering an especially scenic vantage point over the city. Why not check it out and grab a fika? You do, however, need an entry ticket to gain access to the café.

…And Then Take a Walk Around Södermalm:

Södermalm is a beautiful district (found on an island of the same name) with heaps of interesting shops and restaurants. We got a little lost walking around this area while trying to find a late dinner, but we didn’t mind, given the scenery.

Fotografiska is located on one edge of Södermalm, right on the water, so you can access more of the island by climbing the staircase located just behind the museum. If you can, head to this area right around sunset – it’s the perfect viewing spot. 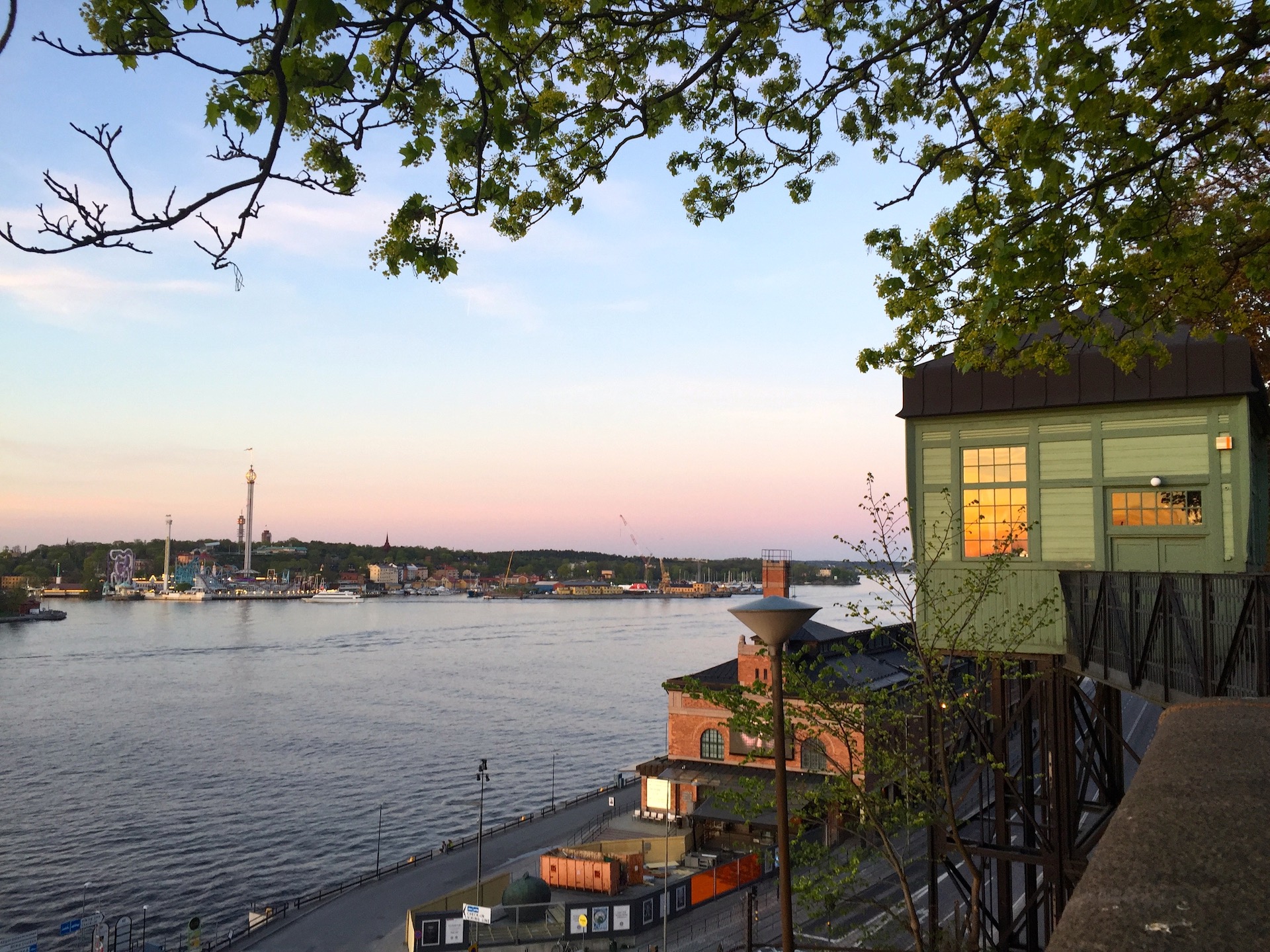 As for that late dinner? We ended up at a cozy restaurant called Nytorget 6, and in addition to a delicious meal, had the chance to meet and hang out with some super friendly Swedes to boot.

Admittedly, this may have been more of a personal mission for us as opposed to an everybody-should-do-it kind of thing. My travel buddy Abbie happens to be a (super talented) tattooer. She was hoping to get one at some point during our trip, and Stockholm ended up being where the magic happened. After spending an afternoon exploring more of Södermalm and visiting a couple of tattoo shops, we were referred to Infamous Tattoo and Abbie set up an appointment for later that same day.

In the end, the image she decided on as being representative of our trip was…a hot dog! During past trips to Iceland, I fell in love with (of all things) the hot dogs that I seemed to find everywhere, namely at the iconic hot dog stand Baejarins Beztu. (“Icelandic hot dogs?!” you say? Read more here.) 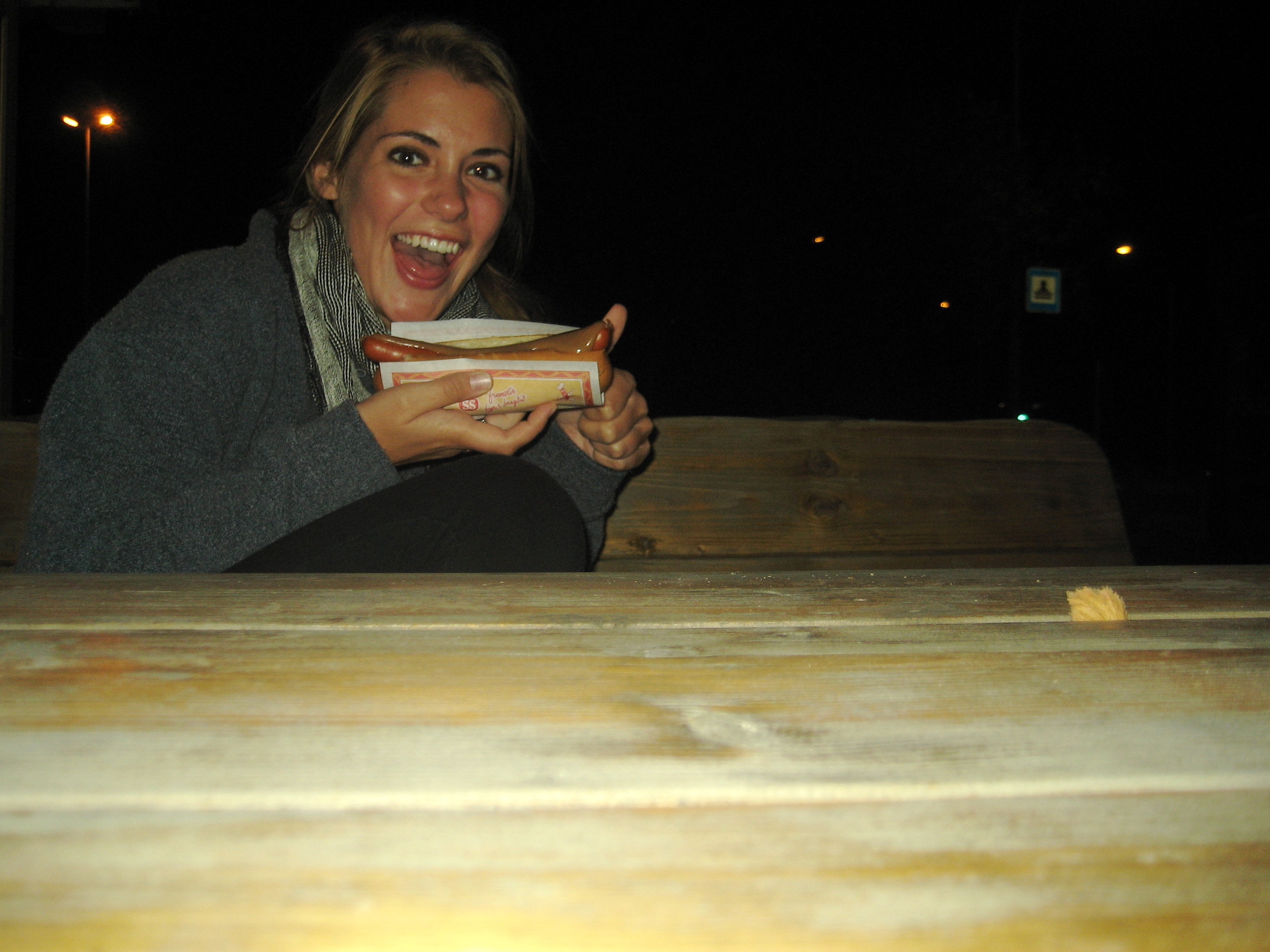 Falling in love with Icelandic hot dogs circa 2010

While Iceland is only sometimes considered part of Scandinavia, I still held high hopes that perhaps the hot dogs we’d find on our trip might be on par with my beloved Icelandic version. As it turns out, while they were similar to the Icelandic style in all four countries we went to, they couldn’t hold a candle to the original gangster from Baejarins Beztu. The closest we came, hilariously and unexpectedly, was one bought from a gas station in Norway. More on that later.

While not successful in the end, the hunt for the hot dog still became a defining feature of our trip, and was indeed representative of our time in Scandinavia. As an added bonus, Abbie asking an intimidating Swedish tattoo artist with face and neck tattoos for a small, cartoon depiction of a hot dog was pretty memorable.

(I think we both felt a little nervous that he would think this was a ridiculous request, but in fact he was very chill about it. When she told him what she wanted, he simply asked, “What do you want on it?” as though she were ordering one to eat. Her response? “Mustard!”)

And yes, in case you were wondering, it is the cutest tattoo you’ll ever see.

We loved: The unexpectedly beautiful metro stations. You know you’re in a special place when this much attention to detail is going into an underground train stop.

We missed: I promise you that we did in fact try the hot dogs here, too…I just failed to snap a picture of them! Womp womp.

I’m sharing this post to two lovely link-ups. Monday Escapes is hosted by Lisa at Travel Loving Family, Sarah from Extraordinary Chaos, Karen from Mini Travellers, and Claire from Tin Box Traveller. City Tripping is hosted by Cathy at Mummy Travels and Elizabeth at Wander Mum. Be sure to click through to their sites for more travel inspo!

Share on PinterestShare on FacebookShare on TwitterShare on EmailShare on SMS
Sweden
January 15, 2017 By Caity Pfohl 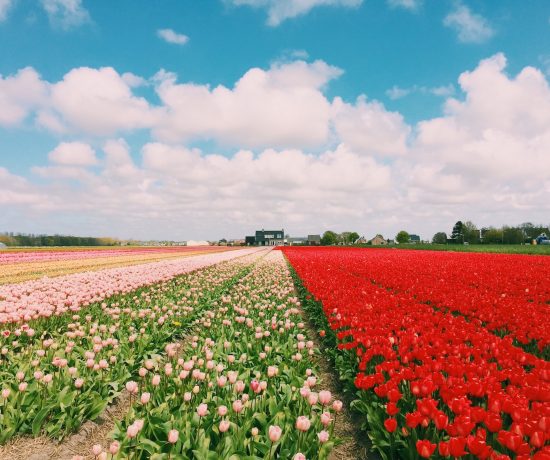 A Hot Dog For Every City: Exploring Scandinavia (Part One)

Why Not Stopover in Iceland?