The Algarve is Portugal’s southernmost region, known for rugged cliffs, beautiful beaches, and seaside fishing villages. When we started our trip planning, we knew we wanted to visit the area – look at one photo and you’ll see why! – but we weren’t sure what parts to prioritize during our short trip.

After a little research, I came across some information about the Percurso dos Sete Vales Suspensos, or the Seven Hanging Valleys walk. This seaside hike makes its way between the Praia do Vale de Centeanes on its western end and the Praia da Marinha on its eastern end.

As soon as I read a little bit about the route, I knew I wanted to fit it into our plans. Boasting sea caves, secluded beaches, unique flora, and towering rock formations, I was all in.

In the end, we chose to base ourselves for two nights in nearby Carvoeiro specifically to give ourselves an entire day to devote to the hike.

While the official start is at the Praia do Vale de Centeanes, we extended it by starting at the Praia de Carvoeiro. This added between one and two kilometers to our walk (Google Maps doesn’t show the seaside route, so I’m not sure of the exact figure).

With the coastal views we were spoiled with throughout this area, adding more to our walk felt like the right decision! Beginning in Carvoeiro allowed us to enjoy a stop at the town’s beach, followed by the Forte de Nossa Senhora da Encarnação, Algar Seco, and the Praia do Vale Covo, all before reaching the official start at the Praia do Vale de Centeanes.

The trail is a combination of wooden boardwalks, earthen pathways, and steep staircases. Some parts have fences, but most do not. This definitely allows for fun detours and gives more options for enjoying the incredible views; just be sure to keep your footing and not get too close to the edge!

We followed the route with the help of red and yellow markers along the way. The only part where we got temporarily confused was at the Praia de Benagil, where you’ll need to walk up the road from the beach and take your first right before you’ll see another marker.

Having planned the hike for a specific day, we had our fingers crossed for good weather, and we definitely lucked out. As we headed east, the inland skies to our left hung grey and ominous, as though rain would arrive any minute; but to our right, the skies above the ocean were bright blue, offering an intense and beautiful contrast to the deep red soil, green grass, orange flowers, and dusty tan rock formations.

Some of the highlights as we continued our walk past the Vale de Centeanes were the Farol de Alfanzina, or Alfanzina Lighthouse, the Praia do Vale Espinhaço, and the Praia do Carvalho.

Perhaps the most famous site along the walk is the Praia de Benagil, home to the Gruta de Benagil, or Benagil Cave. A large sea cave with a small beach and a naturally formed skylight offers a unique and much sought after photo opp.

To get to the cave, you can rent a kayak or take a short boat tour. Some more daring individuals swim from the beach to the cave and back, though this is not advised during certain weather, as the current can get pretty intense.

We considered braving the swim – though I’m decidedly less Michael Phelps and more Michael Scott in the water – but the ominous weather and choppy waters discouraged our plans. We were also hesitant to book a boat tour, as we had read they can be crowded and only stop in the cave for a brief moment.

There are two silver linings if you don’t want to rent a kayak, attempt the swim, or pay for a short and potentially disappointing boat tour. The first is that you can get a look at the cave from above through the natural skylight, which is technically a suspended sinkhole. (Science is cool!) It’s right along the hiking trail, and if you’re careful, you can scoot under the fence to get a better look. While this doesn’t provide the classic view of the cave from inside, it still gives you an idea of its scale and you can peek at the beach below.

The second is that sea caves abound in the Algarve, so if it doesn’t work out for you to see the Benagil Cave, you’ll have many opportunities to see others. While not all of them offer the mystical skylight, they all have their own unique and interesting characteristics.

I had a temporary moment of panic at the thought of not seeing Benagil Cave from the inside. After all, its image was front and center on almost every single Algarve travel poster, guide book or blog post we had seen.

Then I took a step back and remembered that there’s never time for everything. We were surrounded by amazing views, on a hike I had been excited to do for months, with a beautiful beach waiting for us at the finish line. And the panic stopped.

If you’re in the area and are interested in swimming to the cave, I loved this detailed and funny account by Lauren and Craig at Non Stop Travelling.

Our last stop before finishing up the walk at the Praia da Marinha was the Arco Natural, or Natural Arch. I loved this formation, which reminded me of the coastline along the Great Ocean Road in Australia. We enjoyed our lunch here while taking in views of Praia da Mesquita and Praia da Marinha from above.

Once we made it to the end of the walk at Praia da Marinha, we refueled with a coffee from the small café at the bottom of the (many) stairs heading down to the beach. Afterward, we relaxed while the clear blue waves lapped rhythmically onto the sand, creating a scene so picturesque that it actually seemed more like a highly edited computer screensaver or green screen than real life. Turns out, that’s just Portugal!

We did the walk just one way to give ourselves time to relax at Praia da Marinha without having to rush back. This was a good decision as we were also exhausted by the time we were done! Not having access to data on our phones, we crossed our fingers that we would be able to find WiFi to arrange a cab back to Carvoeiro.

While we didn’t find any right by the beach, we took a short walk toward town and ended up at The Old Fashioned, a cute roadside spot where the waiter generously let us connect to their WiFi to book our ride. We ended up getting coffee and were given these adorable biscuits to boot. Thank you, kind stranger, for saving us from the 5k walk back to our guesthouse!

I’m so glad we were able to do this hike during our time in Portugal. It felt like such a great introduction to the Algarve’s iconic coastline and I would highly recommend it to anyone heading to the region, first time or not.

As we were traveling sans car, we booked a home base as close to the trail as possible; however, if you do have access to a vehicle, the trail’s central location would make it an easy day trip from many of the region’s popular hubs, and there are car parks at many of the beaches along the way.

Have you visited Portugal’s Algarve region? Would you like to?

24 Hours on the Costa Brava 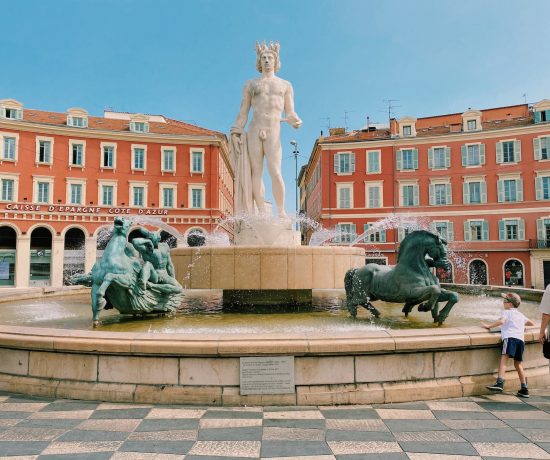